The CSR activities of BCDA are focused on programs for its biggest stakeholder, the Armed Forces of the Philippines (AFP) and project-affected communities.

In responding to the needs of its stakeholders, BCDA is guided by the following CSR philosophy:
"We at BCDA are committed to fulfill our mandates to our stakeholders by improving the quality of life of and giving dignity to our workforce, our families, and the communities that we develop through the conversion of former military bases and other properties into premier sustainable centers of economic growth."

Projects for the AFP

•    Aid to our Military Frontliners

The BCDA sought opportunities to render support to the military troops who stood in the front lines during the battle against COVID-19, and during other calamities that hit the country.

Among opportunities were the donation of dental equipment to the 1301st Dental Dispensary, Headquarters and Headquarters Support Group (HHSG) of the Philippine Army (PA). The equipment enabled the unit to cope with the “new normal” practice in dentistry, and to remain fully operational during the COVID-19 pandemic.

Hygiene kits were also provided for troops deployed in the National Capital Region (NCR).
The initiative was done in partnership with the 7th Civil Relations Group of the AFP Civil Relations Service.

•    Provision of a Medical Assistance Fund for the Armed Forces of the Philippines (AFP).

This partnership between BCDA, AFP, the Department of National Defense (DND) and St. Luke's Medical Center (SLMC) began in 2017 to help provide medical intervention and treatment to military soldiers who suffered extreme injuries during the Marawi siege.  Since
then, a revolving fund amounting to Five Million Pesos was established for the AFP to defray expenses on medical treatment for cases which cannot be handled by government and military hospitals.

Earlier in 2019, BCDA provided grocery items to support over 2,000 military troops deployed in Jolo, Sulu. A project of the Philippine Army-Civil Military Operations Regiment (PA-CMOR), the effort was meant to augment needs of soldiers while they are on the ground fulfilling their sworn duties of maintaining peace amidst threats.

During the Yuletide season despite the pandemic, BCDA sustained this initiative and donated a total of 1,500 food packs benefiting our troops from the Army, Navy/Marines, and the Air Force.

•    Partnerships to Support our Military Heroes

BCDA extended financial assistance to families of our fallen comrades in partnership with the Special Forces Alumni Association Inc (SFAAI) and the Hero Foundation.

Through these partnerships, BCDA was able to support educational scholarships for dependents of fallen comrades, medical missions and help secure future of military orphans.

Projects for the Community

•    Labor Day Tribute for the Workers of New Clark City

Over 6,000 workers of New Clark City-National Government Administrative Center Phase 1A were recognized for their service in building the Philippines’ new metropolis. The tribute was jointly given by BCDA, the Department of Transportation (DOTr), the Capas Municipal Government in Tarlac, Clark Development Corporation (CDC), and MTD Clark, Inc.

BCDA, through its private development partner, MTD Clark, Inc.,  hired 500 IP workers in building the New Clark City.  Phase 1A includes world-class sports facilities such as the Aquatics Center and the Athletics Stadium, the Athletes’ Village and the government center.

As one of the key activities under the BCDA’s Stakeholder Engagement Program, the forum is a platform for BCDA to continuously collaborate and meaningfully engage with the AFP. The forum was borne out of the need to inform our military stakeholders about the role of BCDA in the AFP modernization and its contribution to nation building under its mandate.

To date, BCDA has organized 20 forums all over the Philippines. Among these were with the Northern Luzon Command in Tarlac, the Central Command in Cebu, the Eastern Mindanao Command in Davao, the 202nd Infantry Unifier Brigade in Laguna and the Philippine Navy in Fort Bonifacio, Taguig.

Saludo sa Sundalo is a joint project of BCDA and  its main development  partners in  Fort Bonifacio and Villamor Air Base. The project aims to recognize the sacrifices of our military by extending discounts and other privileges to the AFP and their dependents. 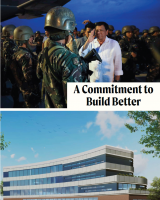 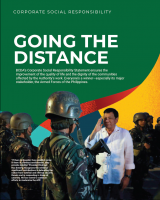 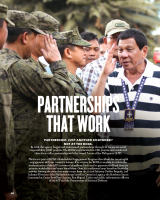 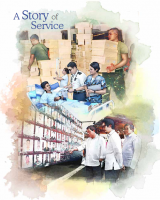 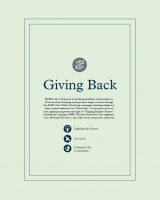 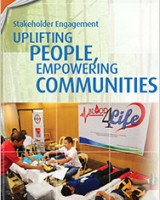 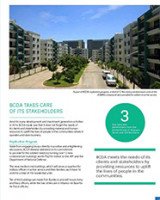 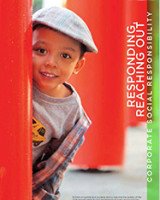 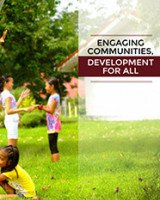 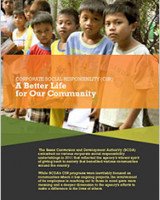 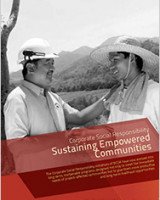 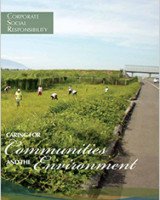 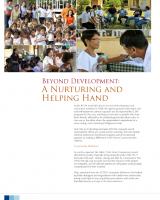 BCDA pursued environmental projects like the "Greening SCTEX Program" that aimed to grow 50,000 tress along the entire stretch of the toll road in five years.

BCDA gives premium to inclusivity in its development projects. It is guided by its CSR Philosophy in reaching out to project-affected communities.

The Philippine Science High School (PSHS), in partnership with the Bases Conversion and Development Authority (BCDA), is constructing a 4.6-hectare learning site in New Clark City, Tarlac, which will serve as a campus for its senior high school

Clark International Airport’s (CRK) new passenger terminal building, which will open its doors to passengers and visitors by the end of 2021, will feature inclusive amenities such as all-gender restrooms, nursing stations, and multifaith prayer rooms

Inspired by the natural beauty and key features of Central Luzon, the new Clark International Airport (CRK) terminal in Pampanga and the New Clark City Athletics Stadium in Tarlac are both in the running for prestigious global design awards.

The Athletics Stadium at New Clark City in Tarlac, a centerpiece facility of the 30th Southeast Asian Games in 2019, has been shortlisted by the World Architecture Festival as among the best completed buildings across the globe.