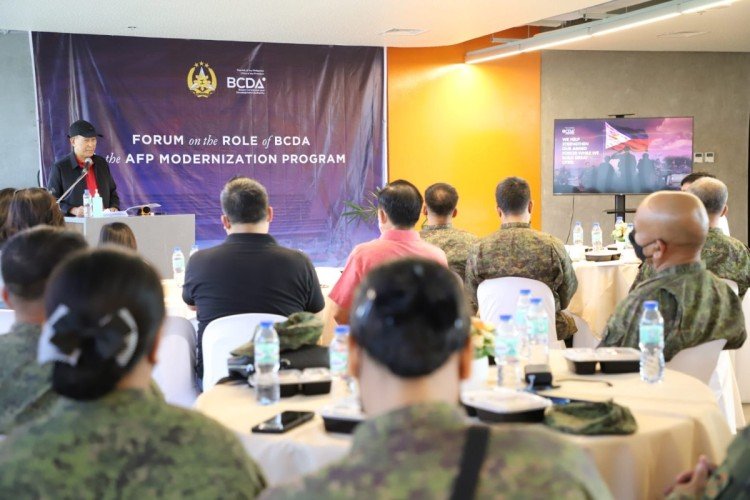 Recognizing the Armed Forces of the Philippines (AFP) as an integral partner towards development, the Bases Conversion and Development Authority (BCDA) reaffirmed its commitment towards continuous cooperation and open dialogue with its major stakeholder, and in supporting its modernization program.

This was guaranteed by BCDA Chairman Delfin N. Lorenzana during the stakeholder’s forum on the role of BCDA in the AFP Modernization that was hosted by BCDA for the 7th Infantry (Kaugnay) Division of the Philippine Army at New Clark City (NCC) on August 25.

"We assure you that the right share from the sales, lease, and joint venture receipts of former military camps in Metro Manila are remitted for the modernization program of the military," said Chairman Lorenzana.

BCDA, a state-controlled enterprise, is mandated to help strengthen the armed forces by building great cities, spearheading the conversion of former military bases into centers of growth and functional replication of military facilities.

Towards this end, the BCDA has been organizing fora since 2011 “to align with AFP” and explain its contribution to the AFP Modernization Program. Under Republic Act No. 7917, thirty-five (35%) percent of BCDA remittances to the national coffers shall be utilized to financially sustain modernization projects and aid in strengthening the AFP.

From 1993 to 2022, a total of PhP 56.4 billion of BCDA disposition proceeds went to the AFP, about PhP 45.3 billion of which went to AFP Modernization Program, while PhP 11.1 billion of its proceeds were utilized in the replication of military facilities.

"This allowed the AFP to acquire game-changing equipment and facilities that will definitely help strengthen our troops and bring us a step closer towards a world-class Armed Forces,” he explained.

Chairman Lorenzana, who was former Defense chief of the Philippines, also expressed gratitude to the 7th Infantry (Kaugnay) Division in their efforts to sustain peace and stability in the region. It can be recalled that the BCDA inked an agreement with the said Philippine Army Division last May for the deployment of paramilitary troops to augment the security force at the New Clark City.

Meanwhile, BCDA President and Chief Executive Officer Aileen R. Zosa delivered a detailed presentation on the completed and on-going projects of the agency that support the AFP Modernization efforts, and responded to queries and suggestions from the trooper.

"These developments are really for the people. Sa atin itong lahat - for the AFP, the civilians, BCDA, investors and business people. We share in all the benefits of these developments,” Ms. Zosa stressed.

Assistant Division Commander BGen. Luis Rex D. Bergante, speaking on behalf of MGen. Andrew D. Costelo, the Commanding General of the 7th Infantry (Kaugnay) Division, expressed their group’s gratitude for the effort BCDA extended in letting them appreciate developments in New Clark City and updating them on BCDA's initiatives for the AFP.

"I am sure our group will have wider perspectives with regard to the BCDA. We are looking forward to seeing the international and global-standard facilities here in New Clark City. I hope we will have another activity for other Kaugnay troopers, depending on the availability of schedule,” BGen. Bergante said.

Other facilities in the New Clark City were also exhibited to the troopers, including the 525-unit condominium-type compound called “The Residences,” the disaster-resilient National Government Administrative Center (NGAC), and the Athletics Village which houses participating athletes and guests to NCC-hosted sporting activities.