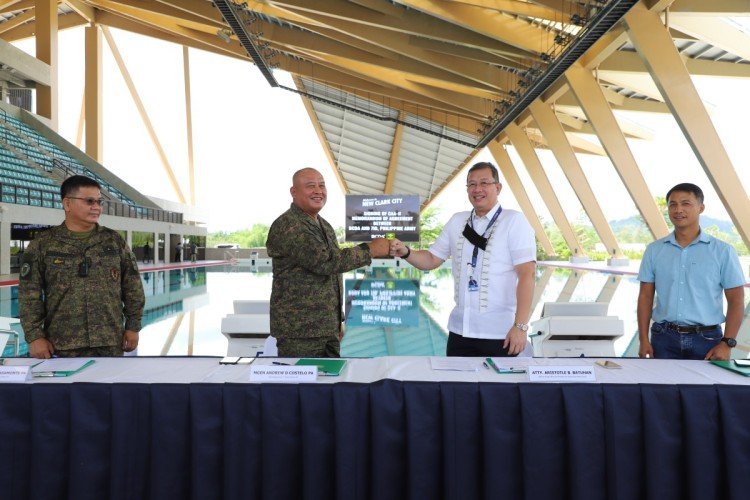 TARLAC – Ensuring that New Clark City will remain a safe space for business and people alike in the years to come, the Bases Conversion and Development Authority (BCDA) and the Philippine Army's 7th Infantry Division (7ID) renewed their sustained cooperation agreement to maintain peace and order in the rising metropolis.

The move paves the way for the unhampered development of the government’s big-ticket projects and private investments in New Clark City, facilitating the inclusive growth of its communities and a business climate primed for continuous commercial activities.

BCDA Officer-in-Charge President and CEO Atty. Aristotle B. Batuhan and Major Gen. Andrew D. Costelo, Commanding General of the 7th Infantry (Kaugnay) Division, enabled this through the signing of the memorandum of agreement (MOA) on May 4, Wednesday, at the New Clark City Aquatics Center for the deployment of paramilitary troops to augment the security force at New Clark City.

The MOA will take effect upon the approval of the Secretary of National Defense, and shall remain in force for a period of three years. It will supersede the original agreement the two parties signed in September 2018.

"The New Clark City (NCC) development requires a devoted, dedicated and exclusive group of personnel to be present in the property during the entire duration of the construction and development ... BCDA believes that the presence of the Armed Forces of the Philippines (AFP) in the entire area of NCC will assure the deterrence of any potential and possible threats to its development," the MOA read.

During the MOA signing, MGen. Costelo emphasized, “The security and protection of these vital infrastructures are our responsibility as the protector of peace in the community. With our collective commitment to serving the Filipino people, together we can do more.”

Batuhan acknowledged that 7ID’s efforts have brought peace and stability to Central Luzon, ensuring the security and protection of communities in the region.

He noted that the 7th ID's moniker, Kaugnay, is linked to their mission of fulfilling people's aspirations and partnership in nation building–similar to the very purpose of the Build Build Build infrastructure program of the Duterte administration, which envisions solutions that will enable a comfortable life for all.

"With your dedicated men joining our team, I am confident that we can proceed with planned developments smoothly and faster. Let me congratulate your command for successfully weakening insurgency in Northern Luzon through the years. We believe that you have been instrumental in sustaining peace and stability in the region which contributed greatly to the rise of this metropolis, allowing us to host both national and international events since we opened in 2019," Batuhan said in his speech.